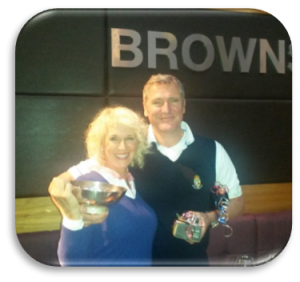 I am the Captain of The Mere golf club next year and have chosen the Cheshire branch of MND Association as my nominated charity for the year.

I chose MND because my wife`s first husband, Terry, who she was with for 30 years, was diagnosed with MND in 2005 and Rosalind cared for him for 5 years at home before he died in 2010

I am particularly interested in raising money to support the carers. Together with Joel, Hal & Margaret we will be looking at ways where we can improve the respite care facilities in Cheshire.

Throughout my year we will have various fund raising events. I have Captains Challenge matches most weeks where I and a partner take on another pair for 18 holes of golf in a match play better ball format. My opponents make a contribution to the charity and increase it if they lose!

I have organised a captains charity day in July where we have a team competition with a small entry fee for each team and a Sportsman’s Dinner in October with comedians and after dinner speakers where we hope to raise most of the funds through an auction on the night.

In December we will also be having a Christmas Party for all golf members where we will have a raffle that will raise more money for both my and the Lady Captains charities.

I am greatly looking forward to my year and Rosalind and I will be doing our best to raise as much as possible for this very important area of MND support.