Would you prefer to talk? Call our branch contact Dianne on 07929 732958 who can tell you more about the support we offer 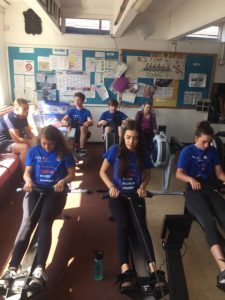 A group of students from Chester schools dug their oars in for a sponsored row to raise valuable funds for MNDA Cheshire. The National Citizenship Service is a government run programme which enables young people age 15-17 to gain new experience and valuable life skills to help them prepare for the future. As part of their NCS Award, students have to choose, and fundraise for a particular charity.

Chloe Grant, a group member said, “ We have chosen MNDA as our charity, because we believe it’s important for people to be aware of MND and how it can affect people and their families.”

The students (Chloe Grant, Isabel Safina, Stephan Grant, Lewis Power, Sophie Clark, Isabelle Moran, Emily Dudley and Alexandru Urasoi) raised a grand total of £200.  They did this through donations, selling MNDA  merchandise and last but not least, using the facilities at Chester Rowing Club to row 21 miles between them, which is the equivalent width of the English Channel between Dover and Calais! For this outstanding effort, they received sponsorship from friends and family.

The group told us that they had enjoyed their fundraising challenge and gained valuable experience along the way. It was the first time any of them had done anything like this. They also wanted to thank MNDA Cheshire for the support they had received which helped them to achieve their fundraising objective.

We say a massive well done to them for completing their award and also for raising money which will go directly to help people in Cheshire living with MND. And, will Chester Rowing Club gain some new members too?!