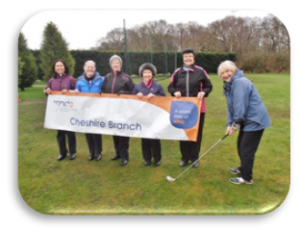 Hi my name is Sandra Jones and from January 2016 I have the privilege of being Lady Captain at Woodside Golf Club, Holmes Chapel. I took up golf from scratch about 10 years ago after my retirement.

It is a great game – fresh air – good exercise – interesting people – its just hitting that little ball thats the problem!

When the opportunity arose for me to support a charity I thought of Motor Neurone Disease.

I first became aware of MND when the actor David Niven died (one of my favourite actors at the time) in l983. Latterly I saw the film The Theory of Everything about Stephen Hawkins and a couple of programmes by Alan Titchmarsh where he had revamped the gardens of MND sufferers.

During my year I will be raising money from a Race Evening, Lady Captain’s Drive-In, Swap-Its, Raffles, Book Sales and anything else I can think of! In doing this I hope to bring MND to the attention of many more people.