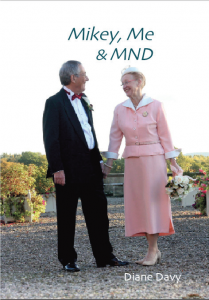 This book, written by Diane Davy, charts in a chronological series of short Haiku-like poems, the moving journey from husband Mike’s diagnosis in summer 2015 to the end of his life in the winter of 2017.  It captures a series of moments in time, each moment a particular memory, recalled in verse by the author.

Diane, who lives in Nantwich, is a long time member of the British Haiku Society and a regular contributor to their publications. Haiku is a form of poetry first made popular in Japan centuries ago and it is now appreciated and reproduced around the world. Each Haiku consists of only 3 lines and 17 syllables and challenges the poet to convey a vivid message in a very limited number of words. Diane achieves this in her very readable, often poignant and occasionally humorous book.

Thinking in observational and emotional terms in Haiku meant that she was able to express her feelings in a structured and pared down way, thus getting to the nub of the impact of Mike’s illness on them both.

Each Haiku is dated for reference thanks to Di’s meticulous recording of events and emotions during the period from diagnosis to the end of his life.

Di sent a copy of “Mikey, Me and MND” to Sally Light, Chief Executive of MNDA. Sally had met Mike on a number of occasions and she replied by letter to Di saying that “the poems and your afterword are very beautiful and moving”.

When asked about her feelings about the publication of her book, Di said  “ I still feel amazed that it actually came into being”.

The book, priced £7 can be ordered through Di ( di.davy@icloud.com ) or the publisher ( info@albapublishing.com ) or even Amazon.  All proceeds will go to the Cheshire branch of MNDA.

We would encourage everyone to read Di’s book. It’s a personal journey, captured in a particular style of verse where a few words sum up so much.