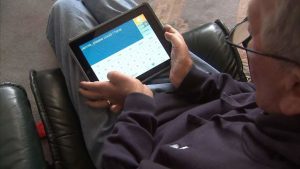 When I was first diagnosed with Motor Neurone Disease in 2008, I realised that eventually my voice would deteriorate to a point when I would lose it completely, and require a synthetic method of speaking. Although I accepted that I would need something, I did not want a robotic, Stephen Hawking type voice. Ideally, I wanted MY voice!

So with my background in research and development, I started to investigate voice banking whilst I still had a voice. I managed to find a research project at Colorado State University in the USA, who after some persuasion agreed to accept their first overseas participant on the project.

I then spent the next six months recording on special software something like 800 phrases, and many different words and sounds. From the resulting database, the students at Colorado built my voice, which was difficult because not only was I the only Brit, but I also had a strong Shropshire accent.

So I had a voice ready to use on a Windows based application, which I didn’t have, and couldn’t find one that would be compatible. I wasn’t particularly concerned at that time because my natural voice was still OK.

This changed last year when I started to have difficulty speaking, and found an application called Predictable, which cleverly would predict whole words as I was typing the sentence I wanted Predictable to speak. However, this application would only run on Apple products, and my synthetic voice required Windows based software.

I of course agreed, and following one or two minor problems, Predictable is available from this weekend, in the latest release (Version 4) to people who when first diagnosed, can record their healthy voice, and from that recording a digital but unique voice is created for a time when natural communication becomes impossible.

The release of an App I have been using and testing, which can help people like me, who have difficulty speaking has now been publicised on Sky News,and if you want to watch a short clip then please clikc on the following link http://news.sky.com/video/1364678/app-gives-voice-to-mnd-sufferers